You should have already completed the setup instructions for this workshop and have Git installed. Launch a command line environment (in Windows launch “Git Bash” from the Start Menu, on Linux or Mac start a new Terminal). We will use this command line interface throughout these materials. We focus on teaching Git with the command line as we believe this is the most thorough and portable way to communicate the underlying concepts.

You can use the command line to interact with Git but there is still some extra information you must provide before it is ready to use. Enter the below commands using your relevant personal information as required (don’t type the $).

The information provided here will be included with every snapshot you record with Git. In collaborative projects this is used to distinguish who has made what changes. The --global part of the command sets this information for any projects on which you might work on this computer. Therefore you only need to perform the above commands once for each new computer Git is installed on.

For users not generally familiar with using command line interfaces its worth taking a moment to consider the commands that were just run. To understand what we just did lets break down the first command:

Now that Git is ready to use lets see how to start using it with a new project. In Git terminology a project is called a repository (frequently shortened to repo).

For this workshop you were provided with a zip file. If you have not already, please download it and place it in your home directory. The zip file contains a directory called recipe which in turn contains 2 files - instructions.md and ingredients.md. This is the project we’ll be working with, whilst not based on code this recipe for guacamole is an intuitive example to illustrate the functionality of Git. To extract the archive run the below command:

Then change the working directory of the terminal the newly created recipe directory:

You’ll need to repeat cd recipe if you open a new command line interface. Feel free to open ingredients.md and instructions.md and take a look at them (use a normal file browser if you’re not comfortable doing this on the command line). Files with a .md extension are using a format called Markdown, don’t worry about this now, for our immediate purposes these are just text files. Use of Markdown and Github will come up in the next session however.

To start using Git with our recipe we need to create a repository for it. Make sure the current working directory for your terminal is recipe and run:

The path you see in the output will vary depending on your operating system.

Before we do anything else run the below:

This is a very useful command that we will use a lot. It should be your first point of call to figure out the current state of a repository and often suggests commands that can be used for different tasks.

Don’t worry about all the output for now, the important bit is that the 2 files we already have are untracked in the repository (directory). We want to add the files to the list of files tracked by Git. Git does not track any files automatically and you need make a conscious decision to add a file. Let’s do what Git hints at:

Now this change is staged and ready to be committed (note that we could have saved some typing here with the command git add ingredients.md instructions.md).

Let us now commit the change to the repository:

We have now finished creating the first snapshot in the repository. Named after the command we just used, a snapshot is usually referred to in Git as a commit, or sometimes a changeset. We will use the term commit from now on. Straight away query the status to get this useful command into our muscle memory:

The output we get now is very minimal. This highlights an important point about the status command - it’s purpose is to report on changes in the repository relative to the last commit. In order to see the commits made in a project we can use:

We’ll talk in more detail about the output here but for now the main point is to recognise that a commit has been created with your personal information and the message you specified.

For our first commit we saw that this is a two step process - first we use git add then git commit. This is an important pattern used by Git. To understand this in more detail it’s useful to know that git has three ‘areas’.

The relationship between the commands we’ve seen so far and the different areas of Git are show below: 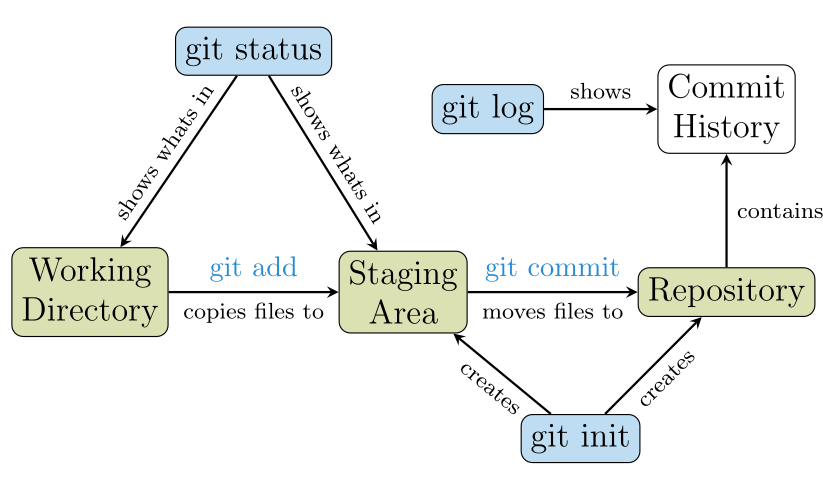 Add “1/2 onion” to ingredients.md and also the instruction “enjoy!” to instructions.md. Do not stage the changes yet.

When you are done editing the files, try:

There’s lots of information here so take some time to understand the output. If your output doesn’t contain colours you may want to run git diff --color.

First, practice what we have just seen by staging and committing the changes to instructions.md. Remember to include an informative commit message.

Now, run git status and git diff. Then, stage and commit the changes to ingredients.md but, after each step run git status, git diff and git diff --cached. What is the difference between the two diff commands? How does running staging and committing change the status of a file?

The last exercises highlights the reason Git use a staging area before making commits. You can make file changes as you want all at once and then group them together logically to make individual commits. We’ll see why having only sets of related changes for a specific purpose in a single commit is so useful later on.

Your output will differ from the above not only in the date and author fields but in the alphanumeric sequence (hash) at the start of each commit.

Exercise: Recalling the changes for a commit

The command git log shows us the metadata for a commit but to see the file changes recorded in a commit you can use git show:

Use one of the commit hashes from your Git history. To see the contents from when the commit was made try:

To Err is Human, To Revert Divine

A very common and frustrating occurrence when using Git is making a commit and then realising you forgot to stage something, or staged something you shouldn’t have. Fortunately the Git commit history is not set in stone and can be changed.

To undo the most recent commit you can use:

This shows that the content which was part of the commit has been moved back into the staging area.

From here we can choose what to do. We could stage some additional changes and create a new commit, or we could unstage ingredients.md and do something else entirely. For now lets just restore the commit we removed by committing again:

Changing History Can Have Unexpected Consequences

Using git reset to remove a commit is only a good idea if you have not shared it yet with other people. If you make a commit and share it on GitHub or with a colleague by other means then removing that commit from your Git history will cause inconsistencies that may be difficult to resolve later. We only recommend this approach for commits that are only in your local working copy of a repository.

Sometimes after making a commit we later (sometimes multiple commits later) realise that it was misguided and should not have been included. For instance, it’s a bit of cliche to tell people to “enjoy” at the end of a recipe, so lets get rid of it with:

Check the contents of instructions.md and you should see that the enjoy instruction is gone. To fully understand what revert is doing check out the repository history:

Using git revert has added a new commit which reverses the changes made in the specified commit.

This is a good example of why making seperate commits for each change is a good idea. If we had committed the changes to both ingredients.md and instructions.md at once we would not have been able to revert just the enjoy instruction.

The Ultimate Guide to Undoing in Git

It can be quite easy to get into a messy state in Git and it can be difficult to get help via a search engine that covers your exact situation. If you need help we recommend consulting “On undoing, fixing, or removing commits in git”. This page contains a very comprehensive and readable guide to getting out of a sticky situation with Git.